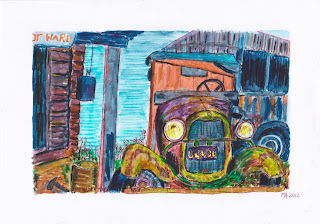 Sometimes I go shopping for art supplies with my friend and fellow artist Diana. I have tons of art supplies already, but I NEED to have more. To impress Diana, I decided to show some kind of restraint last time we went to Cass Art and did not buy a big box of Blendy Pens. I had some old ones at home already, and, really, I didn't need them. Or did I? Actually the Blendy Pens were that one elusive tool that would have magically guided my hand into creating the most amazing art EVER. I had to have them. As simple as that. So I bought them online for £2 more than they cost at Cass. When they finally arrived in the post I discovered that they were bigger than the ones I had already, and I much preferred the smaller ones. I started to wonder as to whether the Cass ones were big or small. Should I go back to Cass and get them? Two boxes of Blendy Pens - isn't that a bit too much? Do I "deserve" them? Of course, if I showed myself worthy of them. But how? The idea of a Blendy Pen pilgrimage started taking shape in my head: I am going to walk to Cass! 5.5 miles!!! The next day I set off at 9am with a small rucksack and a bottle of water and walked, walked, walked. The funny thing about this pilgrimage was that I walked by two places where I used to live ages ago, and so it also became a memory lane kind of walk. I walked by shops, gardens, dogs, cats and lots of joggers (were they all running to Cass?). An altogether fantastic and dreamy experience. 2 hours later I arrived in Cass, ran downstairs and grabbed the Blendy Pens box, only to discover that it was identical to the one I had bought online. So I bought something else (well, I had to, after all that!) and took the bus home.
As a present for Diana's birthday I made this sketch of a vintage car from a photo I took in Julian, AZ, and coloured it with... the mighty Blendy Pens!
Posted by franvisions at 09:52 1 comment: