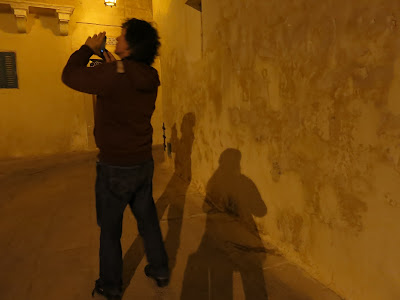 I was thinking, while doing an ECG for my new hip, I was thinking that the ECG was similar to my moods, little peaks and lows, smaller, wider, higher, lower.  I was also thinking of how polarised my mood peaks are, with a high = collect, and low = discard. In the high peaks I get excited about collecting everything, creating, reading, watching, doing, a magical whirlwind of stuff. In the lows, I entrust my memory with all the work, and believe that anything written, anything physical, will choke me more than give me joy. All of these waves are as frequent as the ECG, it's the rough sea of my life, and the more I sail it, the less I seem to know the way. I spend quite some time in these ruminations, trying to convince myself that collecting, keeping, writing down, making, is always good, even when the belief wavers. And I get a shiver of happiness thinking of Leonardo writing about his soup becoming cold, and Tolstoy's diaries, so many that nobody will ever accomplish the task of translating them all. Yet Tolstoy didn't write his diaries for 15 years. 15. OK, he was writing War and Peace, in the meantime, and maybe then watching football on TV (I know what you are thinking). But for 15 years his ECG must have changed. And Leonardo was not always happy, or hardly ever, for that matter. So, it's not about happiness, most things aren't. Perhaps it's about sharing. You collect, you preserve, you share. But then, in the lows, I wonder whether it really is important to share, whether it is even possible. And all the work that goes in it, self promotion, the effort (not much) to be understandable, or just to be present. But in the highs of travel, the exploration of new, old, rediscovered, reframed, there is so much, so much wonderful stuff, that quickly leaks away through the sieve of memory, and it's lost forever. Or not. I'm not sure. Did writing about soup help Leonardo fly?
Posted by franvisions at 13:31 No comments: