I walked by Valance Road the other day. 'Valance' was one of the new words I learnt when I first moved to London many centuries ago. I had found a bedsit (as you do) and went to the market to buy bedsheets. I discovered that some of them were 'valanced'. I associate that moment with a bizarre calm in the turmoil of leaving friends and family for a new, lonesome, adventure. For I immediately associated 'valance' with a world of grannies. British or American grannies - not Italian for some reason - with floral wallpaper, freshly made cakes and... well, valances. My first Christmas in London was a lonely affair, my friends went off to their families, and I was left in my bedsit, staring at a dirty wall, partly redeemed by a gigantic Marylin poster. Then I decided to buy myself some presents, including a pink, flowery make-up bag with frills and lace. A gift from my imaginary granny. Moving to a different country entails some re-rooting. There's the excitement of a new life and there is also a profound sense of loss, that needs some dams put in strategic places. Imaginary grannies are great for that. With time, I learnt that what makes continuity less continuous than we would like it to be, is not just moving somewhere else, changing language and all that, but also that everything is always moving, you are ageing and so is the world. In other words, it's not just location, but time that makes your sense of reality way less real. The first sheets I bought in London were the first sheets I ever bought in my life. For what I know, there might have been valanced sheets in Italy too. Should you be interested, there is a particular type of valance called Italian valance, quite grand, actually. So, in a way it's where your attention goes at different times in life that determines your knowledge of the world and the way in which you write history. We are hardly ever aware of things we don't need.
I never met my imaginary granny, but many times I walked into her environment, and felt peace. My caravan in Kent is one such place. It's a static caravan from the Seventies with wonderfully clashing patterns, black and orange carpet, wallpaper with pink flowers and... valanced blue curtains. I would never choose such a candyfloss interior design, but it feels peaceful because, when I am not there, my imaginary granny is, baking apple pie and remembering a past that, just like mine, never really existed.

Posted by franvisions at 22:40 No comments: 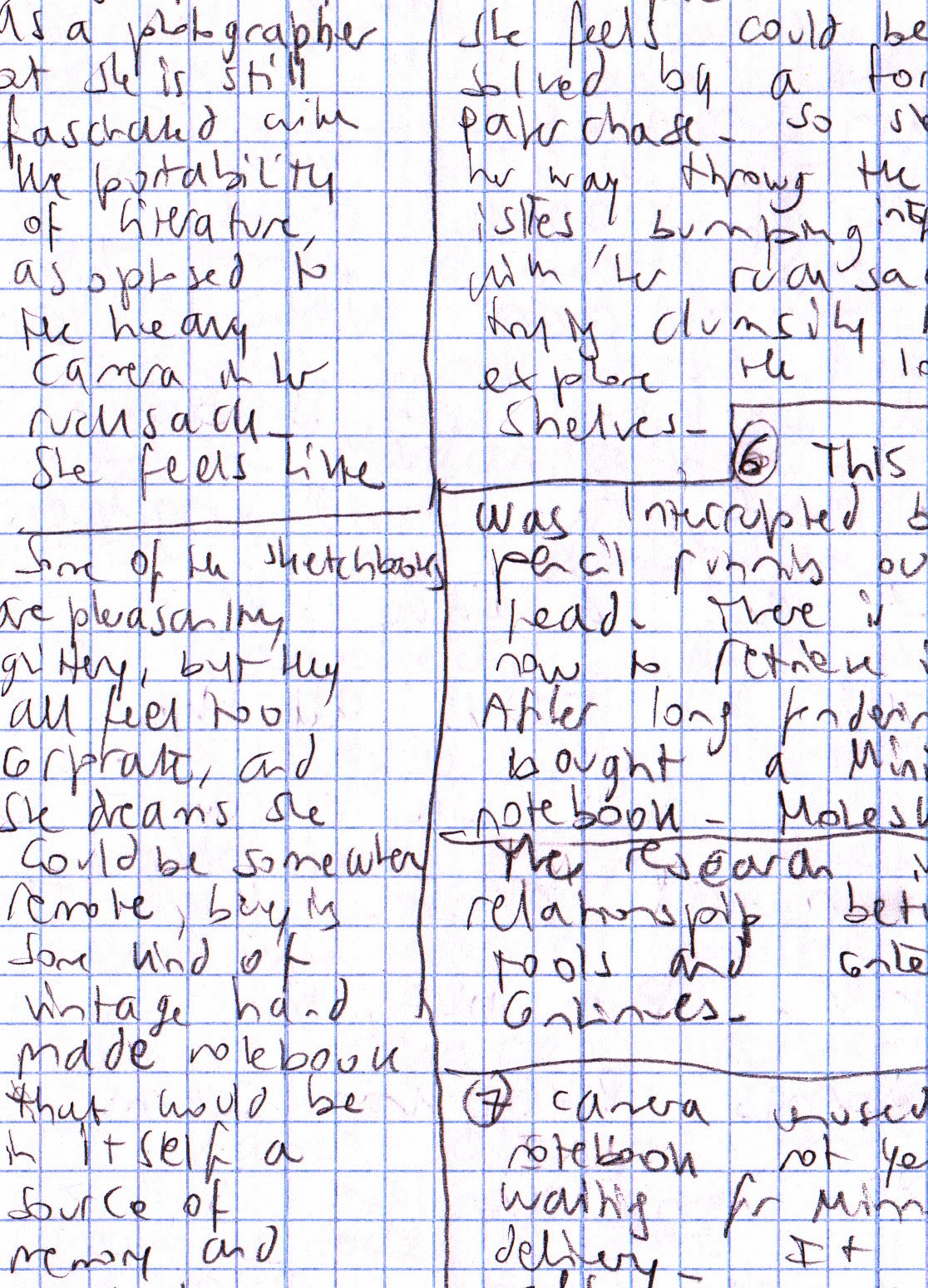 While I was watching Burroughs: the Movie at the ICA, I kept on thinking that I wasn't as yet sure as to what my Monday post was going to be about. I wanted to talk more about Walser's microscripts and about my attempts at exploring notebooks and handwriting, but I also wanted to talk about Burroughs and the movie, which at the beginning felt like a completely different subject. Then I thought of metagrams, where a word morphs into a completely different word by changing one letter at a time. So a thought could become another thought, or another subject by small increments. Lately, I have been intrigued by the idea that writing tools might affect style and writing matter. What you write with might affect form and content. So, I started writing in notebooks with different pens, but also breaking the traditional line after line layout into scattered boxes, albeit chronologically numbered. I have just started reading Philip Hensher's The Missing Ink, so I don't know as yet if it will help me in my search, but interestingly enough he talks about cold and warm tools in a way non dissimilar from Marshall McLuhan's theory of cold and warm media. And pens are definitely warm. I shall remind you that I was thinking all of this while watching the movie. I didn't know much about Bourroughs until recently, when I watched Beat  and then today this amazing documentary. And coincidences started to appear, as by magic, metagrams started to form. Brion Gysin was being interviewed, who taught Borroughs the cut-up technique, a typed writing cut up and recomposed in a different way, like a collage, with new sentences and juxtapositions being formed. Not too dissimilar from my box writing experiments. I also kept on spotting typewriters in the background, and thinking of Martin Eden  by Jack London, written not much after the invention of  the typewriter and definitely influenced by it. I started typing for my dad at the age of six, and never stopped typing since, from Olivettis, to PCs, to tablets and mobile phones, from two fingers, to ten, to one. Now I am investigating pens and paper, almost for the first time. Burroughs was a different person in different settings, and wrote in different styles according to his surroundings. I am curious to know if I write about different things in a different way with a pencil, a marker, a fountain pen or my mobile phone. I don't know where this journey is going to take me but, if nothing else, it will take me to writing more, in more locations and about more things. It can't be bad.
Posted by franvisions at 22:23 No comments: 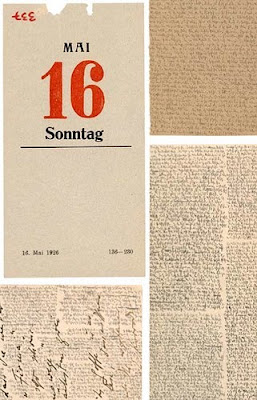 Posted by franvisions at 06:01 No comments: 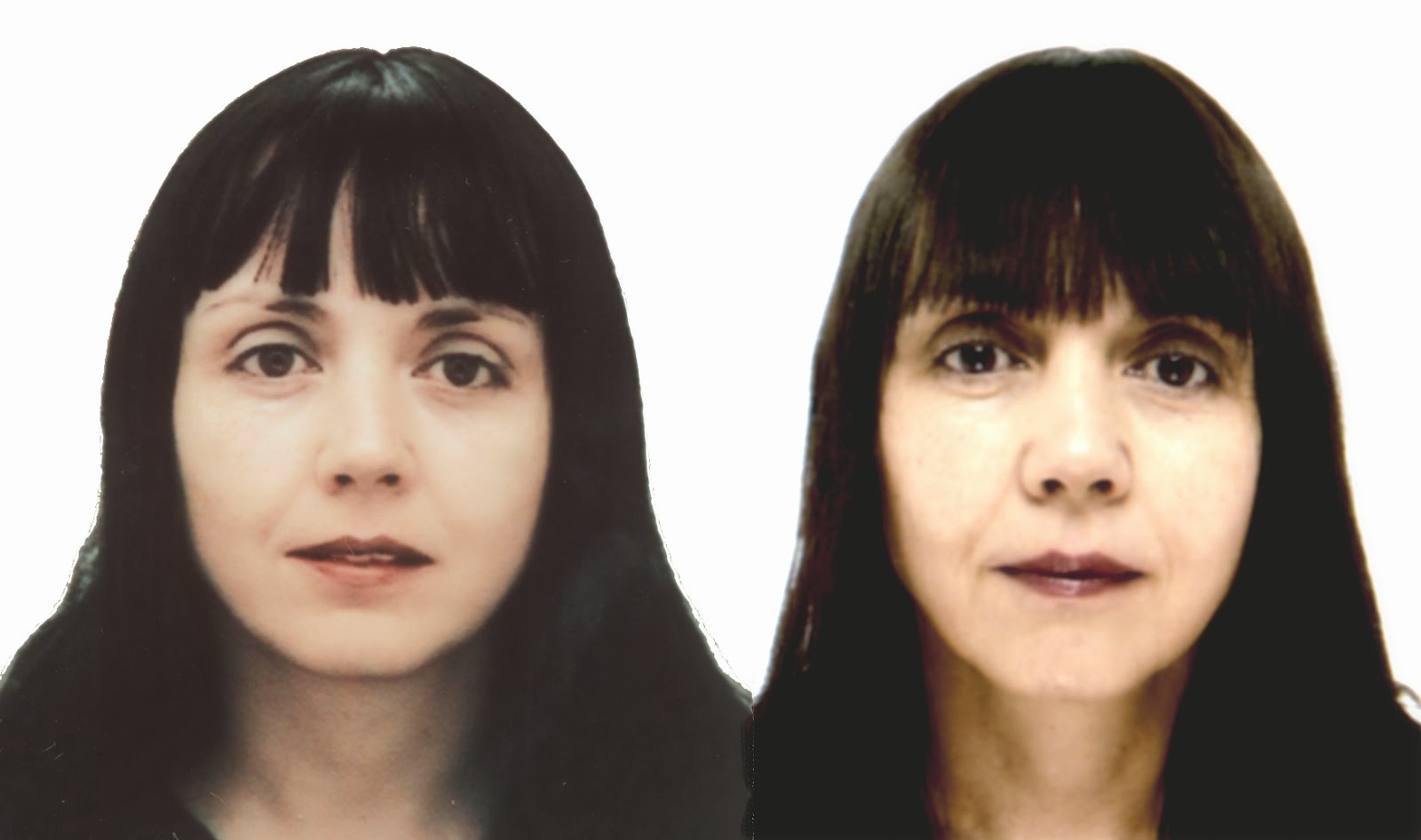 The time comes every ten years to renew one's passport, get new passport photos and end up comparing the now and then. As the changes in features (and hairstyle) are not massive, that gives me the rare opportunity to investigate a more philosophical aspect. After long examination, I've come to the conclusion that the eyes are different. Not so much in the way they look, but in the way they SEE. Are they wiser? Sadder? Not really, they have just seen more. More good things, more bad things, more indifferent things. As we continue our journey through life, we simply see more. Getting old, though, is something different. A lot of times it's a choice. A child learns to walk, he falls, gets up, and tries again. In life we fall, we get up, we walk, we fall, get up, walk, until one day some of us say, "I'm old now, I don't want to get up again". So they sit on the cold floor for ten, twenty, forty years. That, to me, is being old. The rest is just change, the scenery outside the window is always moving, the past is moving, our desires, sometimes, our interests, our jawlines, why not. Our faces. But new avenues open up in front of us, new possibilities, new adaptations, new discoveries, all in that blend of good, bad, indifferent. As long as we keep on getting up, we can keep on exploring.
Posted by franvisions at 22:30 No comments: