On weaving and other stories 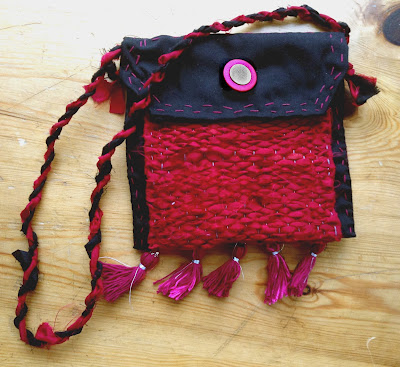 The word 'trama' in Italian means both weft and plot.  Perhaps because of that, I have always associated weaving with narrative. Perhaps, also, because I was thinking of Penelope's web which seemed to unravel parallel to Odysseus's journey. I don't know if weft and plot have etymological affinities in English, but the word 'thread' for instance is used to describe a continuity in a situation or story. Stories have been woven and embroidered throughout times and cultures. But it was only when I started weaving that I understood why at a deeper level. Everything gets woven into your fabric, the music you are listening to, your thoughts, your memories. It also becomes a way of making sense of things, 'string' them together. My interest for weaving, and, more generally, for fibre art, I think started from a passion for upcycling, repurposing, finding ways to use scraps of anything, paper, cardboard, and, of course, fabric and yarn. For some reason, this journey kept on taking me back to Japan, where recycling is not just a modern buzzword, a concept used to soothe the consumer's sense of guilt. Creative reuse of  material has existed in Japan for hundreds of years.  At the basis of it is the concept of 'mottainai', a regret for waste. 'Mottainai' is an old Buddhist word, linked to the Shinto idea that objects have souls. 'Boro' is the clothing used by peasants and artisans between the 17th and the 19th century. Basically they are garments made of rags, often in indigo shades, stitched together, patches to repair old clothes. And because of that, they are also journals, memoires, mementos of clothes once belonged to parents and grandparents. The other word that inspired the little handbag I made, is 'sakiori', narrow strips of worn out fabric weaved into new fabric. Which is what I did here, with and old piece of lining fabric. I also used my very primitive version of  'sashiko', a functional embroidery used to reinforce fabric. The world of Japanese textile art is amazingly inspiring, and I have only scraped the surface here. But this handbag I made, while waiting for my hip to heal, was a great experience, completely sewn by hand, with recycled materials, it contains a little part of my soul.

Posted by franvisions at 00:30 No comments:

Being the proud owner of the most awkward furniture in the world, I resorted to the teachings of the princess on the pea, and piled up all sorts of cushions, pillows, throws and towels to prop myself up into a bearable position. On one side of this chair there's a stereo, on the other a table full of my weaving junk. That weird instrument with a yellow handle is a reacher. So, I sit on my chair, listen to music and weave on a children's lap loom. And the mind explores whatever it wants, enjoying the no-pressure zone allowed by the general reduced functionality. So, here goes. I was listening to a radio station algorithmed to match my musical tastes and, surprisingly, it did. Although it had a stronger inclination towards Delta blues than I would naturally have, but I didn't mind. Weaving and dreaming, I ended up in a trailer on the Mississippi river, where a number of different gigantic ladies in crutches were pirohuetting with extreme agility around their environment. Cooking pie, playing acoustic guitar, then getting inside their battered car to go have a drink in some remote run down bar with an analogue clock. And I sang a funeral dirge in my head, for old metal analogue clocks, that are now bought only by hipstery craftbeerers, as a statement.
Getting back to my large lady on crutches, I admire her dexterity. My crutches fall all the time, or they end up miles away from me, or they slip off my arm. The reacher, well, that's another story, it basically has the lamest clamp, and loses grip on heavy objects. Trying to lift a bottle of water from the floor yesterday was almost comical. Ir reminded me of people trying to start a fire with flint. You can either freak out, turn your husband into a full time butler or nurse, or get back to a time in which things took time. That was how it was, and it was not questioned. If it takes half an hour to lift a bottle of water, than that be it. To slow right down like that is actually not bad, it's a humbling, spiritual experience. In the end you feel very calm, and wonder why you ever rushed.
My reacher has a magnetic tip, and I was wondering why, until I dropped all my needles.
Summary of first week with new hip: I spend most of my time dropping things and picking them up, misplacing the crutches, remembering things that I need only once I'm sitting down. Weaving, lots of weaving. I will explore this subject in the next few days, and take you on a dream journey of ancient Japan...
Posted by franvisions at 00:23 No comments: