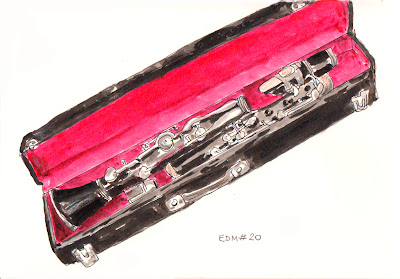 My dad's dad was not my grandad, because he died when my dad was 16. He was a clarinet player. He played at functions and at silent movie theatres. He also ran a hotel which was always full of other artists who never paid. My dad was convinced that his dad had died unhappy and poor because he was a musician, and was adamant that I should not pursue a music career. But in his melancholic moments, he would confess to me that the sweetest sound he had ever heard in his life was his dad's playing the clarinet. At some point in my life, I was given grandad's clarinet, which I treasured like a sacred object. It came to England with me and sat on a shelf while I was trying to look for a musician who could play this old instrument. I wanted to make a recording of it for my dad, so that he could hear the sweetest sound one more time. It never happened.