From Wikipedia: 'Free Fire is a 2016 British action-comedy film directed by Ben Wheatley, from a screenplay by Wheatley and Amy Jump. It stars Brie Larson, Sharlto Copley, Armie Hammer, Cillian Murphy and Jack Reynor.' It will be released in the UK on 31 March. 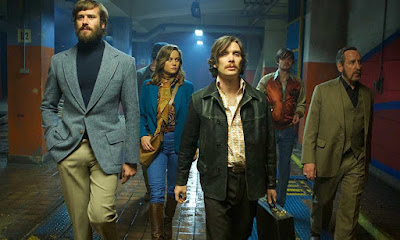 Free Fire. That's pretty much it for the plot. So why should anybody want to sit through 90 minutes of gratuitous violence? Because it's very well orchestrated and compelling. The interweaving of the free-jazzy music with whistling and rumbling gun shots, other sound effects, surround-sound voices, is very clever, and so are the lighting, photography, and location (a shabby warehouse). The characters are quirky, each in their own way, and funny, but not excessively so. In a way, it's like watching a cheap Seventies movie with modern definition of image and sound. A treat if you have bouts of nostalgia... But the question arises: whom is this film for? What is the target audience, what will be the effective audience? Not strong enough to be a cult movie, not Hollywood enough to be a Hollywood movie, it will probably linger in a state of DVD limbo.

The following is NOT a spoiler. Talking with the projectionist after the screening, he suggested that if it had a different ending, it could appeal better to a Hollywood, mainstream, audience. As he didn't suggest what ending would have worked better, I went through all the possible endings in my head, that would have made it more commercial, but didn't find any convincing ones.

My verdict: if you want a very pleasant 90 minutes of a well directed and acted mindlessness, if you enjoy well choreographed stunt work and revel in the anxiety of closed spaces, you will love this film. I know I did.